This Social Entrepreneur May Appear Scattered But She's Laser Focused

Devin: What do you think of within that skill set as being your superpower?

Michelle: I am a very practical problem solver. The analytical thinking from the legal training side is something that definitely helps evaluate things. I’m a practical problem solver. I believe there are solutions to all problems. So for me, it’s about communication, openness and problem-solving. I guess that’s multiple superpowers, but I see it under the umbrella of communication.

You could be forgiven for thinking Michelle Thimesch is a bit scattered. She is working on several major projects right now, but they are all closely aligned in solving a single problem. She’s no more scattered than a laser-guided missile.

She is the CEO of Crowdfund Mainstreet, which she founded with Jenny Kassan. She also organized an investor network called Angels of Mainstreet. Most recently, she raised a fund to create Opportunity Mainstreet in Baltimore. With Jenny, she hosts a podcast called Capital Insight.

Her goal is to fix capitalism to better serve people. 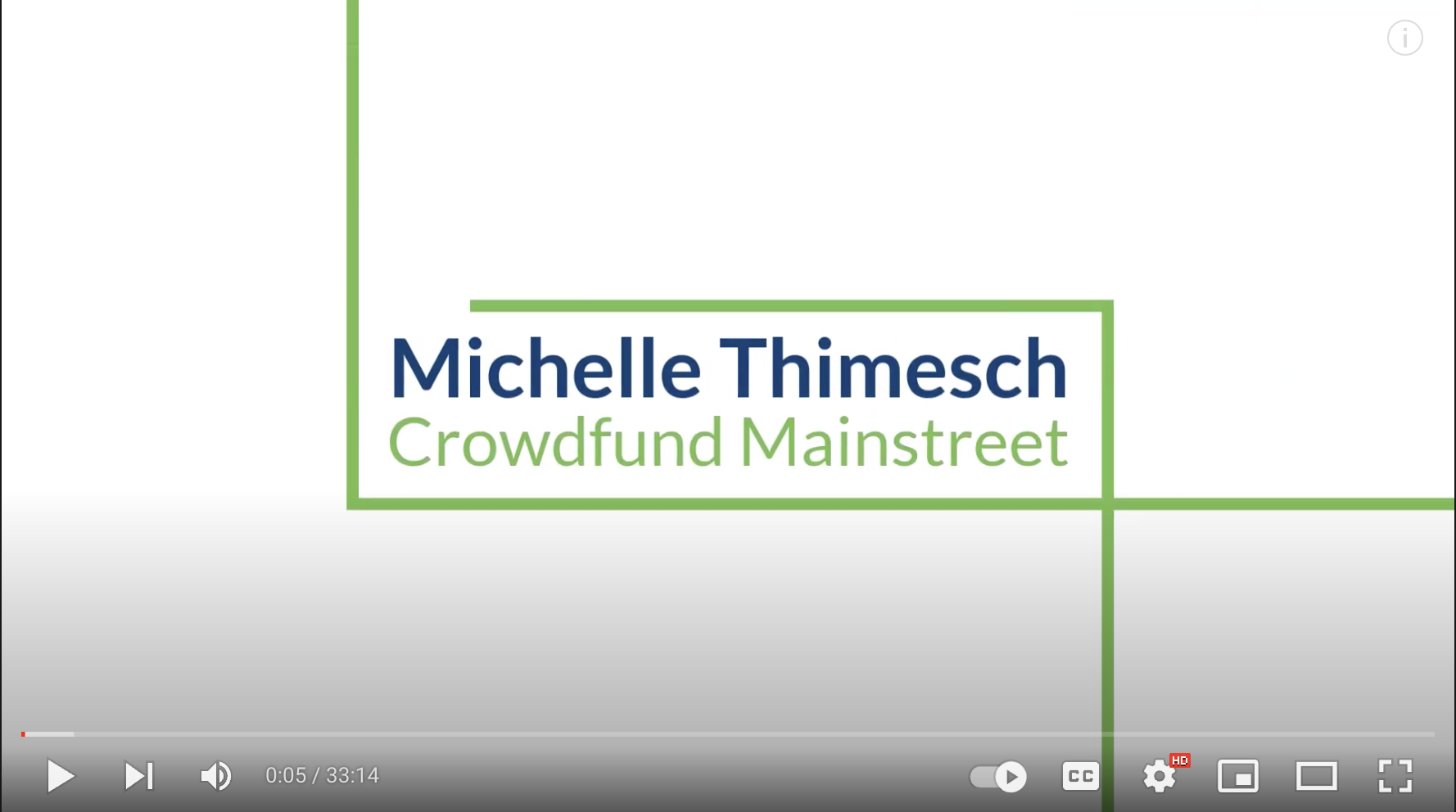 A decade ago, Michelle was practicing law in California. “Most of my clients were closely held businesses. A lot of the focus of my work was transitioning businesses from one generation to the next or selling them to key employees,” Michelle says.

As a result, she began to focus on finance and capital, looking for more creative ways to help clients. When the 2012 JOBS Act passed, allowing ordinary investors to buy shares in startups and small businesses, she thought, “This is so game-changing.”

It took four long years for the SEC to implement the law signed by President Obama. Michelle, like many others, anticipated that implementation would bring a fundamental shift in the capital markets toward greater inclusion and equity.

When the SEC issued the effective rules in 2016, and the market opened, “I was mortified,” Michelle says. “It was all business as usual.”

“A lot of the hype and the early commentary around the platforms that existed and that were out of the gates starting was focused on really helping people to invest alongside venture capital,” she says. “While there’s nothing wrong with that ecosystem for the individuals that it is a fit for, the vast majority are not a fit for that type of capital.”

About this time, Michelle connected with like-minded lawyer Jenny Kassan. They began dreaming about what a more values-aligned crowdfunding site would look like. With Jenny’s encouragement and partnership, Michelle led the launch of Crowdfund Mainstreet in 2018.

Michelle’s parents and grandparents were entrepreneurs. Raised in the middle class, she’s always seen entrepreneurship as “a path towards self-sufficiency, self-determination.” But the closer she looked, the more she saw that this was becoming less and less true—and crowdfunding was a way to fix it. 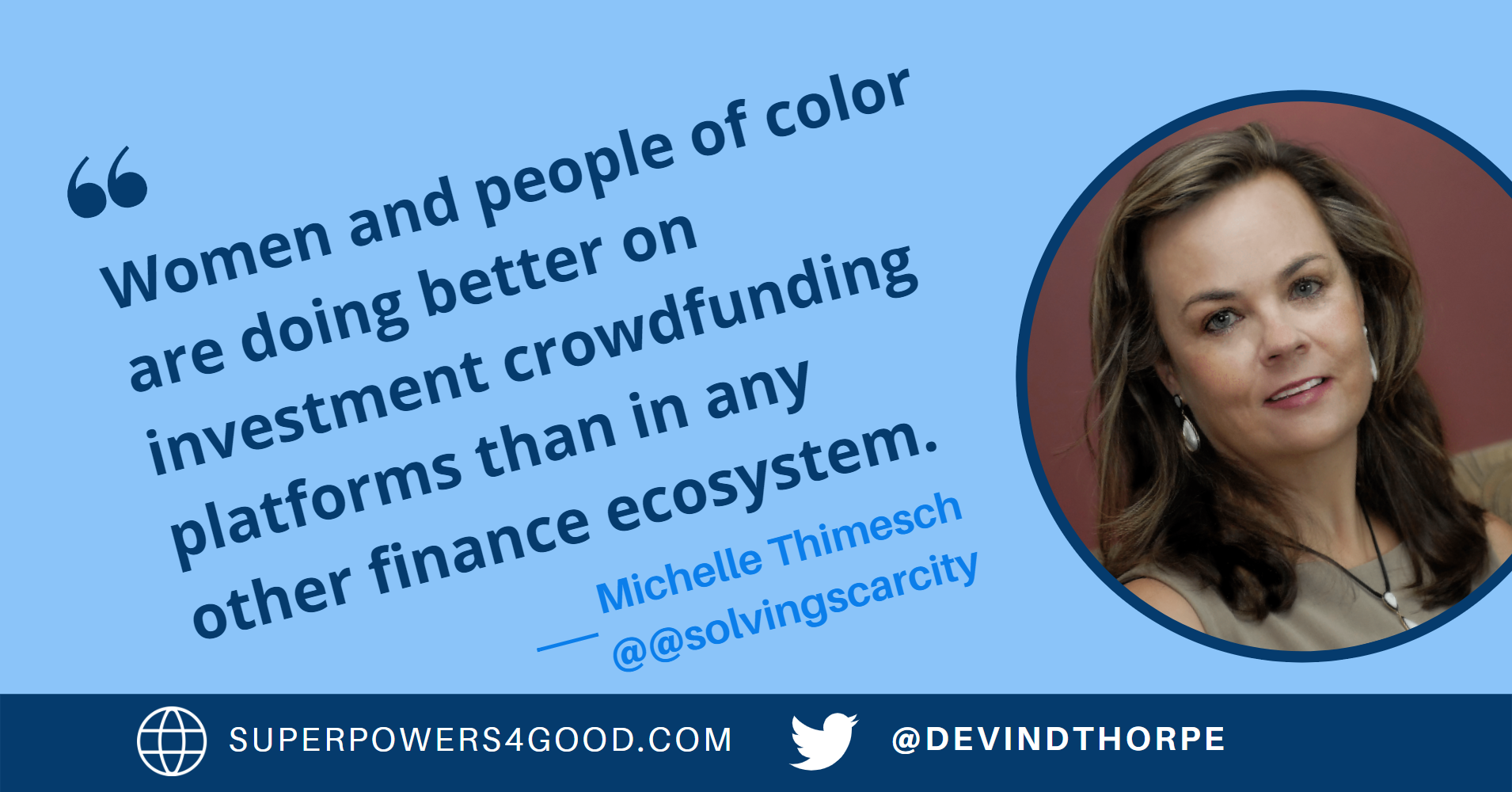 There is growing evidence that it’s working. “Women and people of color are doing better on investment crowdfunding platforms than in any other finance ecosystem,” Michelle says. “About 70% of the time, a woman or a person of color will reach their minimum investment.”

Still, women raise only a third, on average, of their male counterparts. There is still work to do.

Building Angels of Mainstreet
About six months after launching Crowdfund Mainstreet, Michelle and Jenny began to appreciate that the role of a portal was that of an intermediary. To help their entrepreneurs raise money on the platform, they needed to cultivate a community of investors.

“The lifetime membership for Angels of Main Street costs $100, so anybody can join for $100 and be a member for life,” Michelle says. “We ask that people commit to investing a minimum of $500 a year directly in a company.”

Other members are newer to investing and may not think of themselves as investors. Together, they are learning how to effectively deploy capital in private markets with real impact as well as financial returns. 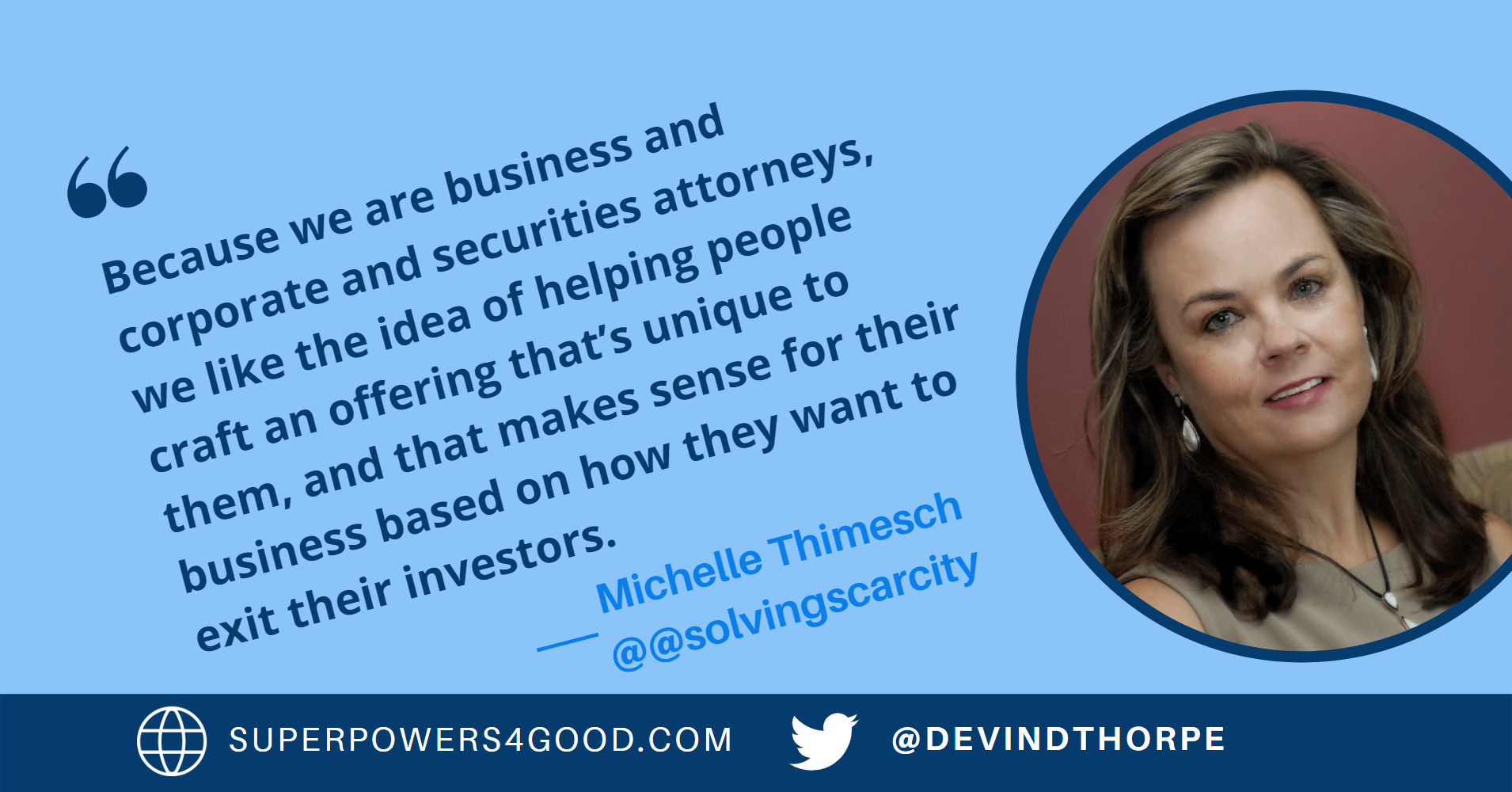 “Because we are business and corporate and securities attorneys, we like the idea of helping people craft an offering that’s unique to them, and that makes sense for their business based on how they want to exit their investors,” Michelle says.

The Angels of Mainstreet serves that purpose, allowing entrepreneurs to learn from a dialog with investors.

“When we used to do events for entrepreneurs, we would always have one evening at least where investors would join the entrepreneurs and try to create connections and conversation between the two groups and realized that that was just not enough, that there still was kind of an awkwardness, a shyness,” she says, explaining the need for the project.

With that in mind, Michelle acquired an 8500-square-foot, four-story building. The ground floor will feature a commercial kitchen operated as a co-op. “There’s a big farm-to-table movement here,” Michelle says. “Even in Maryland, you can get 50 weeks of fresh produce a year.”

At the same time, she is partnering with an organization in Baltimore called Wealth Builders, led by Stephanie Geller, who, Michelle says, “is very focused on activating retail investors, teaching people what it would be like to invest directly in their communities.”

SuperCrowd22
Michelle and Jenny will both be speaking at SuperCrowd22. Crowdfund Mainstreet is also serving as a co-host for the event.

The event will be held virtually on September 15 and 16, 2022 and will feature dozens of speakers, including entrepreneurs, investors, portal leaders and ecosystem experts.

“This is one of the most compelling events since this began about five years ago,” Michelle says. “I think the industry is old enough now that you’ve been able to work on identifying who are all the players, all the different nuances, all the different kinds of offerings and platforms.”

“You won’t want to miss this showcase if you have any interest in the small business finance world,” she says.

We’ll record the program, so even if you can’t attend every hour of the event, you can catch up on it later. The total content will approach 100 hours of invaluable information.

Most importantly, you’ll have opportunities to interact directly with Michelle and Jenny and others like them.

In all her work, Michelle relies on her communication superpower.

How to Develop Communication As a Superpower
Michelle honed her communication superpower in the practice of law. She learned to see communication as a tool for solving problems and a vehicle for change.

She is most proud of having used that superpower to create Crowdfund Mainstreet. Raising the money from a group of patient, values-aligned investors was essential for achieving the goal.

Seeing that there is still work to do, she notes that she is grateful for the investors’ continued patience.

Michelle coaches female entrepreneurs, helping them to realize their full potential. One of the key principles she teaches them is essential to understanding how to make communication a superpower.

Her guidance will surprise you. “One of the things that is the most compelling is teaching people to do the opposite of what we’re inclined to do.”

If you follow Michelle’s example and advice, you can make practical, solution-oriented communication a superpower that enables you to do more good in the world.

Read more and listen at: https://devinthorpe.substack.com/p/this-social-entrepreneur-may-appear?s=r